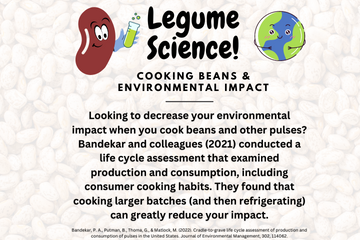 Beans are well-known for their contributions to sustainability, including benefitting soil health, using less water than other crops and sources of protein, and helping reduce greenhouse gas emissions. I was recently reading an article by Bandekar and colleagues and wanted to share their findings with you about the environmental impacts of cooking beans. Why? Is it because it gets lonely just staring at science articles and I wanted a distraction? I believe honesty is important, so yes, partially that. But also because the findings help empower us as consumers to make smarter choices for the environment! Here are some tips about cooking beans to reduce your environmental impact. Check out the text below the graphic for more details on what the article has to say.

What did they do in this study?

The authors conducted a life cycle assessment (LCA) to evaluate the environmental impact associated with producing and consuming pulses in the United States. They modeled four varieties of pulses: dry bean, chickpea, dry pea, and lentil, and they examined three different cooking methods: an open vessel on an electric cooking range, stovetop pressure cooker on an electric cooking range, and electric pressure cooker. They used a cradle-to-grave boundary, meaning they included production of seeds and other inputs and ended at consumers eating beans in their homes (aka from the very beginning to the very end, as the somewhat creepy term ‘cradle-to-grave’ implies). Their “functional unit” was 60 g of dry pulses. For their LCA, they had four stages: crop production, processing, retail, and consumer stage. Environmental impact was evaluated in terms of: land use, global warming potential, fossil resource scarcity, water consumption, freshwater eutrophication, and marine eutrophication. I know, it sounds like an uplifting read, right?

What did they find about the environmental impact of cooking beans and your role as a consumer?

Good news and bad news here, folks. Let’s get the (somewhat) bad news out of the way first. Their study showed that the consumer stage is a hotspot for environmental impact in the overall pulse supply chain in the United States. But this makes sense – the cooking, storage, potential food waste, etc. all add up.

So, what’s the good news? The GREAT news is that you can do something about it! Essentially, the researchers found that environmental impact varies with crop and cooking method, as we would expect. For example, if you are only cooking about 60 grams of dry pulses, then an electric pressure cooker had the least environmental impact (as compared to the other two cooking methods). Why? Because it had a shorter cooking time and greater energy efficiency use.

They also found that environmental impact varies with batch size. If you read the abstract, you will happen upon this literary masterpiece of a sentence, “The impact categories were also highly sensitive to the mass of pulses cooked in the batch.” They then follow that up with this beautifully composed gem, “Increasing the reference flow in OVC [open vessel on electric cooking range] to 1 kg decreased the environmental impact of pulses by 49-87 percent for all impact categories, excluding land use.” What does this mean? It means that cooking larger batches of beans is a great way to significantly reduce your footprint! And yes, the authors did take the added electricity demand for refrigerating and microwaving pulses into account. They thought of everything. (PS I write science articles, too. So I’m making the literary style comments in jest, as someone who also has to adhere to those writing standards. In reality, the bolded sentence about decreasing environmental impact is very exciting and merits at least two exclamation marks!! Wouldn’t you agree?)

Okay, this has been a lot of words. A lot less than were in the actual article, trust me, but, let’s summarize it below:

How can we reduce our environmental impact when cooking beans?

Eat beans and other pulses as a staple food in our diets (which conveniently enough also benefits human health). And then cook more of them – in large batches. Repeat.

Hello, I’m Chelsea (aka Legume Lady), a PhD student researching legumes. I love to cook - and eat! - and want to share some of my favorite recipes here, with a pinch of the science behind legumes. Read More »